A day on Capitol Hill with Greater Philadelphia’s business leaders

Engaging directly with elected officials on Capitol Hill is just one of many ways we encourage business leaders to create dialogue around issues that impact how our members do business across the region, nation, and globe.

On September 24, more than 50 Chamber members joined us on-the-ground in Washington, D.C. to share the message of our regional business growth and to raise issues for discussion that impact Greater Philadelphia’s economic growth. Throughout the day, congressional members gave briefings and took questions from attendees, touching on a variety of issues, including defense spending, budget & appropriations, energy development, health care, transportation & infrastructure, middle market growth, and education & workforce development. 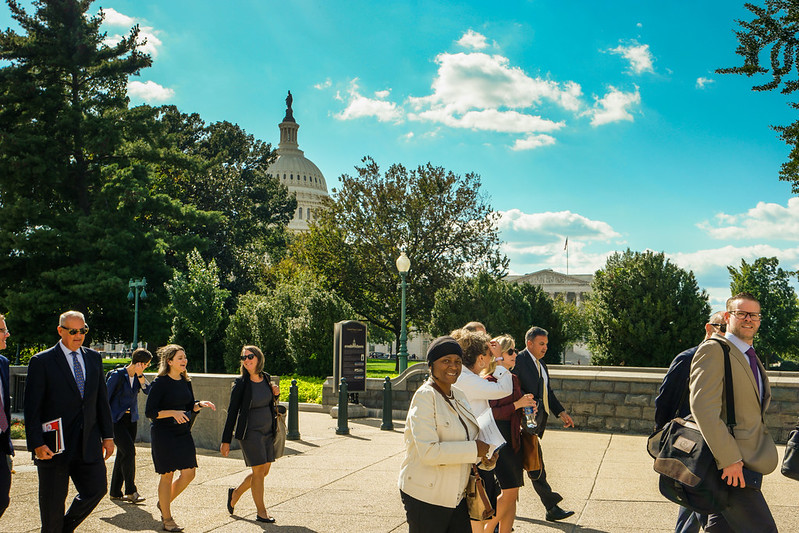 Attendees had the chance to hear directly from:

Education and talent was the hottest topic, a recurring issue in each briefing throughout the day.

“One of my goals: a refocus on career and technological education. We haven’t provided the same incentive or help to students choosing not to go to a 4 year degree.” – @RepSmucker #GoodBizPHL pic.twitter.com/JGNwwp6Vzb

“I’m a cosponsor of the reintroduction of America’s college promise act – which would provide tree tuition for community college, including technical training. Education infrastructure & an ethical good gov is what I care about” – @RepDean #GoodBizPHL pic.twitter.com/0zyAfKt4kz

“Skills gap, inability to pass a drug test, and transportation – the 3 top reasons for unemployment in our region. These should be our top 3 priorities.” – @RepBrianFitz #GoodBizPHL pic.twitter.com/gTdX5qXrqI

Thank you to all Congressional Members who took time out of their day to meet with our members to discuss the Greater Philadelphia business agenda. And thank you to all our attendees for making our trip down to D.C. a successful endeavor.

Our member @HDR_Inc provides consulting for spatial reconfiguration & workplace design changes to ensure social distancing in preparation for a return to work. Find resources from our members to help your biz recover: https://t.co/dSFImdRvqO #GoodBizPHL

It’s been 4 months since COVID-19 began rippling through our region & health care workers have yet to take their foot off the gas. As a TY, @Colliers came together to assemble 300 boxed lunches workers at @TJUHospital, @TempleHealth, & @PennMedicine https://t.co/tjn2iYWvBl

Because cancer doesn't stop or discriminate, even during a pandemic, the @ACSCAN is continuing to advocate at all levels of gov’t to help eliminate cancer as a major health problem. Read more inspiring stories from our members: https://t.co/tjn2iYWvBl